For the application of a sequential manalog race shifter the shift pattern of the manual transmission that is forming the basis is of great importance.

Next to the number of speeds the position of the reverse gear is also of key significance. An ideal situation is provided if two conditions are fulfilled:

First: homogeneity of position –first gear and reverse gear are on opposite sides with respect to the transversal gate of gear neutral.

Second: homogeneity of gate – reverse gear shares either the same gate as first gear or has its own gate directly situated next to the gate of first gear on the side which is opposed to the gates for the higher gears.

The shift pattern is partially homogenous if only one condition is met.

The following examples originate from volume production transmissions, of course, with the exception of the theoretical eight and nine speed variants. For an H-pattern operating logic the necessary attention for a safe and reliable operation is growing with each additional shifting plane, which becomes clear looking at the depictions below. 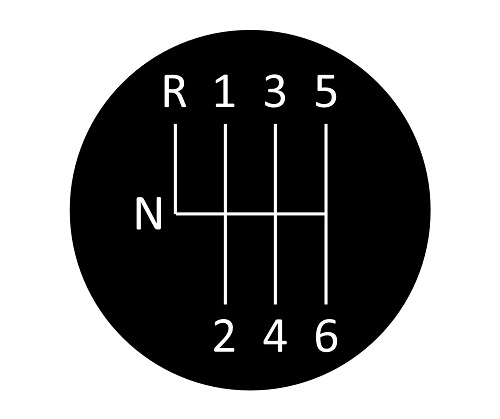 This shifting scheme can be found in many manual transmissions. It is characterized by a clear operating pattern that is close to be called a standard and features a lock to render unintended engagement of reverse impossible. 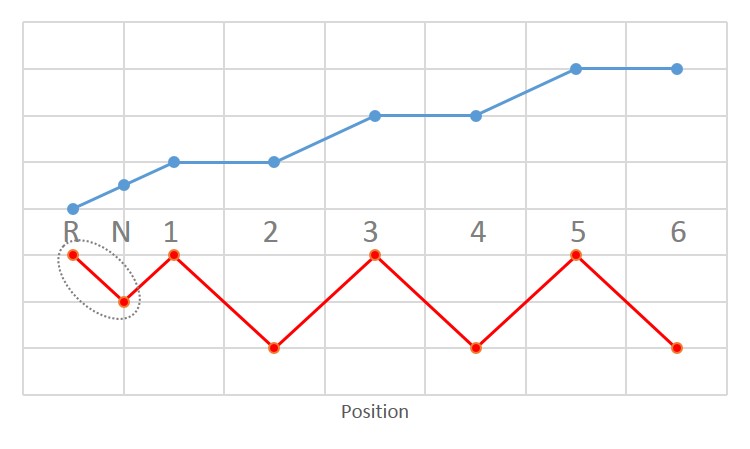 Being also the basis for the manalog SQS6.M2 design concept, this shifting scheme is leading to a special and more complex design due to the particular position of reverse. 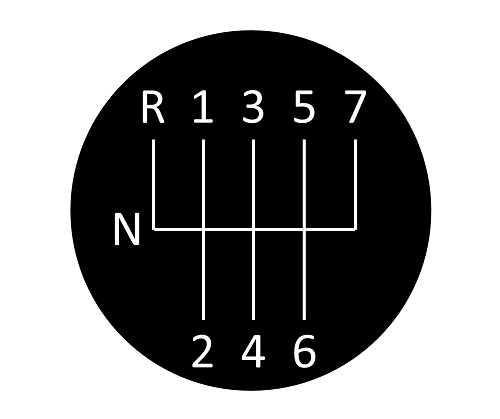 Following a tradition this shifting scheme is an expanded variation of the standard shifting scheme of the 6-speed manual. Adding another shifting plane, room was made for the 7th gear in a slot in right-forward position. 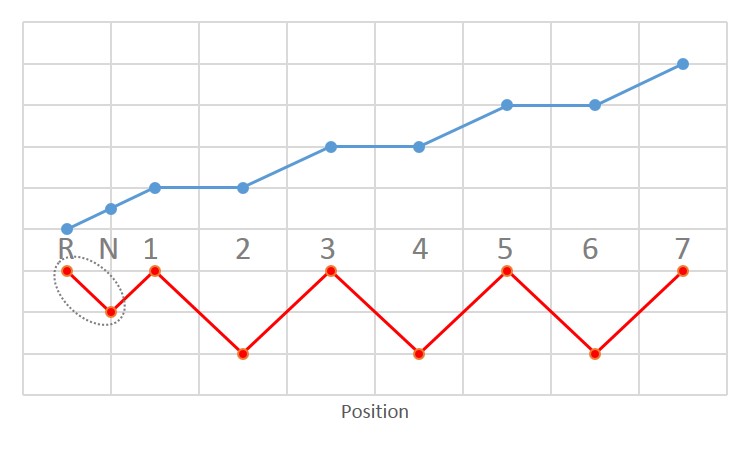 Exhibiting five shift planes this shifting scheme is leading to a special and more complex design due the particular position of reverse and the higher number of planes. 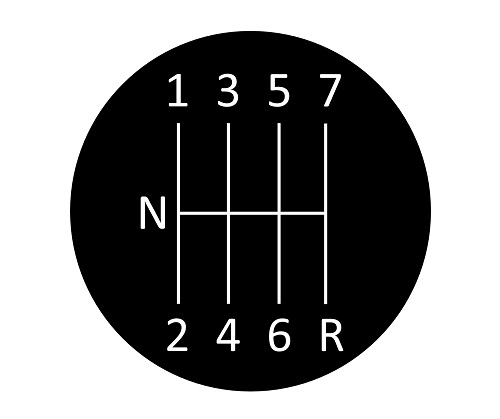 One way to accomplish a shifting scheme for seven forward speeds by using only four shifting planes is to locate reverse in the vacant right-rear position and avoiding its unintended engagement by a reverse shift lock. 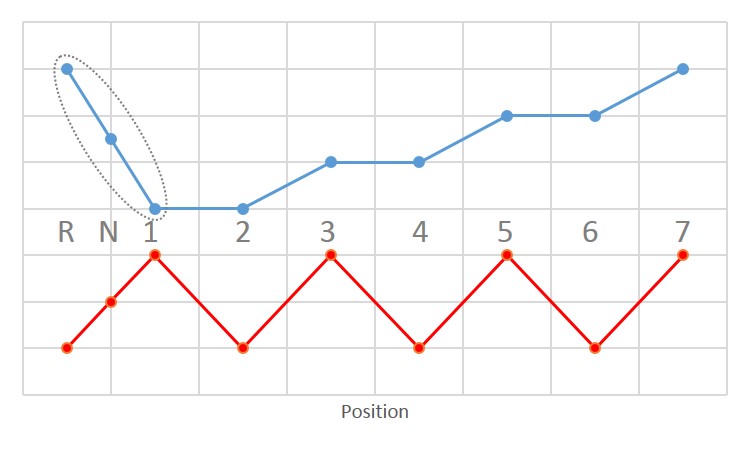 Because of the wide gap between the gates of first gear and reverse, respectively, a higher design effort is required to achieve a convenient ‘1-N-R-N-1’ shifting sequence. This shifting scheme formed the basis for the manalog SQS7.CE concept design. 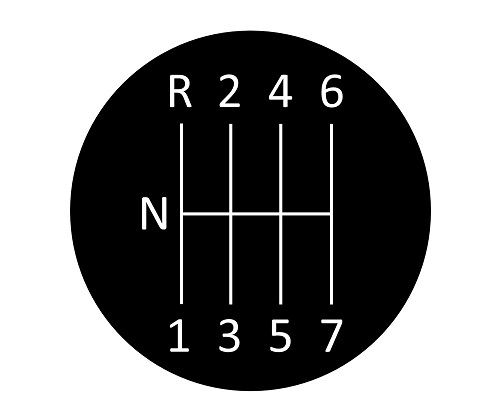 A fully homogenous shifting scheme can be attained in a very compact form by a ‘dog leg’ 1st gear, i.e 1st gear in a left-rear position. For a long time this arrangement came as standard for race cars – then for four or five speeds. 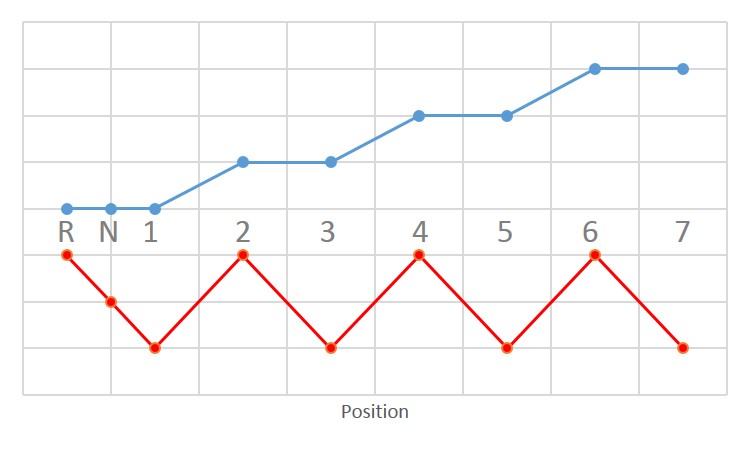 The most compact race shifter of the manalog SQS design family can be accomplished with this shift pattern as the basis minimizing design complexity and package size. This shifting scheme formed the basis for the manalog SQS7.VS concept design. 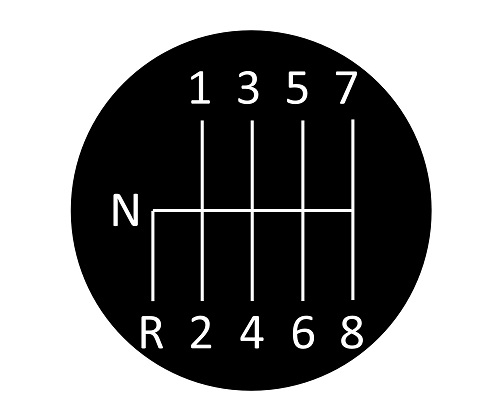 A shifting scheme for eight forward speeds requires five shift planes, of which the plane of the reverse, as shown, preferably forms a separate left–rear slot to be able to design the reverse shift lock as a gate lock. 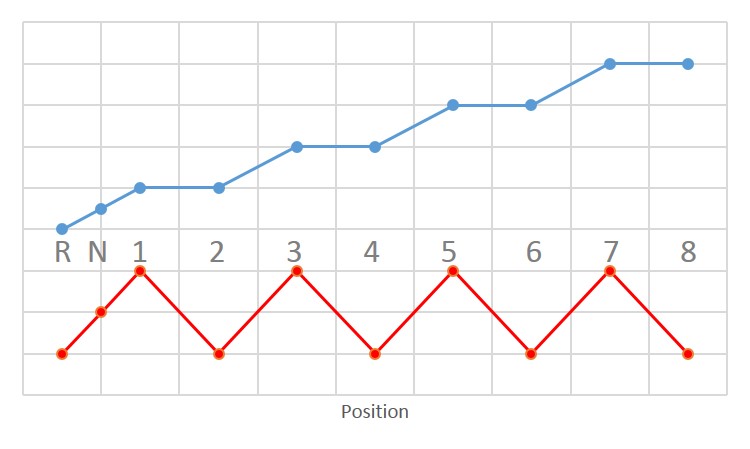 This shifting scheme as the basis for a manalog race shifter creates less effort than a partly homogenous shift pattern for a 6-speed manual transmission. 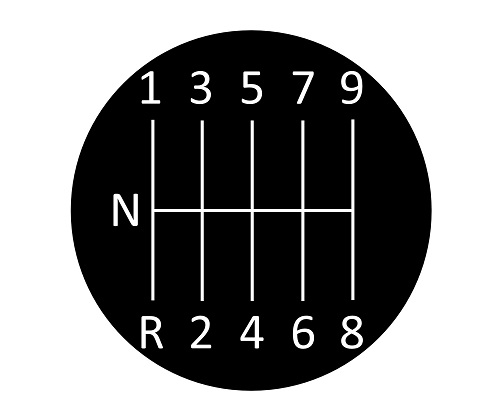 A shifting scheme consisting of five shift planes can accommodate also nine forward speeds, which possibly might be a sensible limit for manual transmissions for passenger cars and comes at least close to modern automatic transmissions. 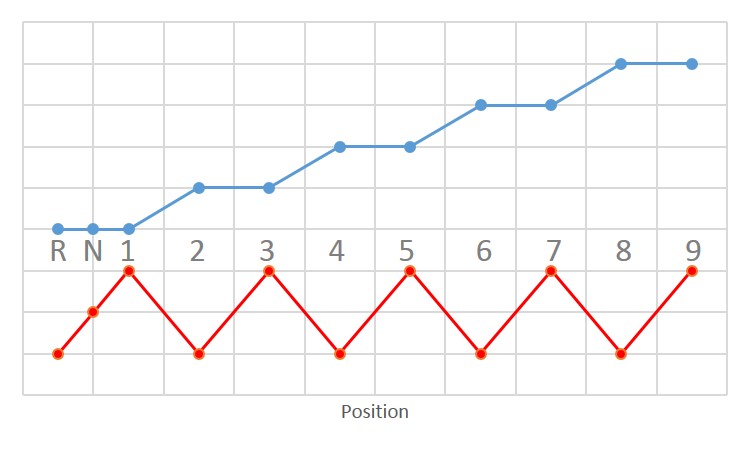 This shifting scheme as the basis for a manalog race shifter creates less effort than a partly homogenous shift pattern for a 7-speed manual transmission.